The Child Catchers Rescue, Trafficking, and the New Gospel of Adoption

“This exemplary study deserves a wide audience among all readers involved with adoption.”
–Library Journal 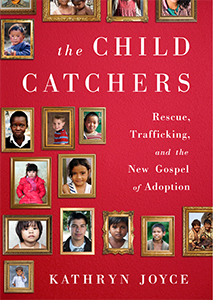 Adoption has long been enmeshed in the politics of abortion. But as award-winning journalist Kathryn Joyce makes clear in The Child Catchers, adoption has lately become entangled in the conservative Christian agenda. To tens of millions of evangelicals, adoption has become a new front in the culture wars: a test of “pro-life” bonafides, a way to reinvent compassionate conservatism on the global stage, and a means to fulfill the “Great Commission” mandate that Christians evangelize the nations. Influential leaders fervently promote a new “orphan theology,” urging followers to adopt en masse, with little thought for the families these “orphans” may actually have. Christian adoption activists have added moral weight to a multi-billion dollar adoption industry intent on increasing the “supply” of adoptable children, both at home and overseas. The Child Catchers is a shocking exposé of what the adoption industry has become and how it got there, told through deep investigative reporting and the heartbreaking stories of individuals who found that their own, and their children’s, well-being was ultimately irrelevant in a market driven by profit and now, pulpit command.

“Incredibly even-handed and fair …Joyce’s book is a powerful call to action, even for those of us who thought we knew something about the ethical issues posed by the adoption industry.”
–Al Jazeera

“As the number of international adoptions has tumbled in the past five years because of tighter scrutiny, the culture wars around such adoptions have intensified. Joyce reveals a facet of this conflict that feminists, in particular, should scrutinize.”
–Ms.

“If anything, The Child Catchers challenges evangelicals to interrogate their agencies, ministries, and ideologies about adoption, leading the charge to reform an industry where corruption has been legion. That way, in the future, families will not live with the uncertainty many must face, or with the overwhelming grief and loss many birth families experience. Rather than condemning The Child Catchers, evangelicals should see Joyce’s book as a gift, motivating them to make sure not one more child—and his family—is treated unjustly.”
–The Nation

“Joyce is a tenacious reporter and a gifted storyteller, and resists the temptation of neat and simple narratives about good and bad people. She makes it clear that, except in a few cases, the fault lies not with individuals but with systems and cultures: the poverty that makes ‘orphan finding’ an attractive if unethical way of making money and turns babies and children into a booming national export product…”
–Daily Life (Australia)

“Joyce’s book is excellent…Joyce’s reporting on these aspects is very deep and very fair.”
–Patrol Mag

“[The Child Catchers] is an important voice for adoption reform and should be read by those who shape adoption policy and those considering adopting from abroad or donating to an international adoption agency or foreign orphanage. It’s laden with facts and figures, but is never dull. FMF highly recommends The Child Catchers.”
–First Mother Forum

“In Child Catchers, Joyce provides an impeccably well-researched window into the world of Christian adoption. Joyce shines a light on the well-meaning who fail to accept – and those who serve them fail to care – that they are too often taking children who have families and are unintentionally increasing an already over-burdened demand that in turn proliferates kidnappings and deceptive practices to fill orders. …excellent and needed…Buy the book. Read it. It will be a treasured addition to your adoption library.”
–Family Preservation Advocate

“The Child Catchers is a serious piece of investigative journalism.”
–Childmyths

“Raises issues we need to talk about.”
–WORLD magazine

-“Joyce focuses a generous but unforgiving lens on the darker sides of domestic and international adoption. …As this increasingly becomes the context in which adoption is understood, it becomes impossible challenge the many problems that Joyce expertly lays out – and yet, all the more important to do so.”
–The Declassified Adoptee

“The Church and the adoption movement cannot ignore these issues any longer. …if we say that we care about orphans and justice, then we must set aside our savior complex and hero mentality. This is the ONLY responsible, holistic, and sustainable way to move forward.”
-Caleb David, Kingdom in the Midst

Advance Praise for The Child Catchers:

“The Child Catchers takes us for a fast and frightening ride down a road to hell that’s paved with ‘good intentions,’ willful ignorance, and outright deception. The facts, presented here with care and fair-mindedness, are terrifying. And Joyce’s analysis, calm and powerfully perceptive, is devastating. It’s the best and most revealing thing I’ve read on Christian nationalism in years. May this book stand as a landmark work of investigative journalism.”
—Jeff Sharlet, bestselling author of The Family and C Street

“In this chilling exposé that promises to become a muckraker classic, Kathryn Joyce rips the veil off a sacrosanct institution in America and other rich nations and reveals how adoption can harm both individual birth mothers and adoptees as well as the progress of children’s and women’s rights globally. The Child Catchers is essential reading for adoptive parents, those thinking about adopting, and anyone concerned with democracy— nationally and throughout the world.”
—Debbie Nathan, journalist, coauthor of Satan’s Silence, and author of Women and Other Aliens, Pornography, and Sybil Exposed

“The Child Catchers fills an important gap in the national conversation, not just about adoption, but about imperialism and feminism as well.”
—Jessica Valenti, founder of Feministing.com and author of The Purity Myth and Why Have Kids?

“The Child Catchers shatters conceptions about how and why Americans adopt, deftly exposing the connections between adoption trade groups, the religious right, and U.S. policymakers, while delicately revealing a horrific series of ongoing crimes and mis- deeds perpetrated against children. A timely, important book.”
—Erin Siegal, author of Finding Fernanda

“A compelling, meticulously researched, and insightful dissection of conservative Christians’ participation in the international adoption complex. The Child Catchers unmasks the fertile new ‘mission field’ adoptable children have become and gives voice to those hurt by this neo-colonial Christian mission. An important must-read.”
—Anthea Butler, associate professor of religious studies, University of Pennsylvania