Quiverfull Inside the Christian Patriarchy Movement 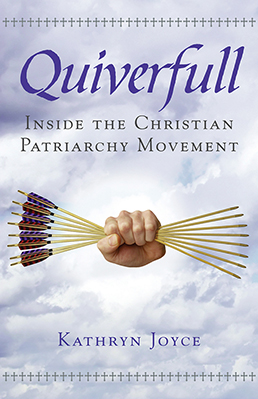 Fundamentalist Christianity may have lost some access to power in the last election, but it has long-term plans. In this fascinating look at the new generation of fundamentalist Christian women, journalist Kathryn Joyce introduces us to the world of the patriarchy movement and Quiverfull families. Here, in direct and conscious opposition to feminist calls for marital equity, women live within stringently enforced doctrines of wifely submission and male headship. Instead of raising independent daughters, these Christians advocate a return to keeping daughters at home-and out of college-until their marriage to a suitor approved by Dad. To counter reproductive rights, they eschew all contraception in favor of the Quiverfull philosophy of letting God give them as many children as possible-families of twelve and more children that will, they hope, enable them to win the religious and culture wars through demographic means.

Quiverfull is a fascinating examination of the twenty-first-century women and men who proclaim self-sacrifice and submission as model virtues of womanhood-and as warfare on behalf of Christ.

While mainstream America faced the possibility of a female president, a grassroots movement has been quietly organizing to restore patriarchy—and reduce women to the status of slave-like breeders. Kathryn Joyce gives us a first-ever glimpse into the Christian patriarchy movement, and her riveting reporting makes it all the scarier. If you’ve been feeling complacent about women’s status—read this book!
—Barbara Ehrenreich, author of Nickel and Dimed and This Land is Their Land

“Prairie muffins,” hayrides, and babies—lots of babies—don’t sound like the stuff of fanaticism, but in Quiverfull Kathryn Joyce brings us the news from the most militant frontier of fundamentalism—a “patriarchy movement” of right-wing women who embrace a caricature of 19th century womanhood as a strategy for culture war. At turns funny, terrifying, and heartbreaking, Quiverfull is a necessary book, an empathetic and brilliant analysis of how this small group of believers shape mainstream ideas about motherhood, marriage, sex and gender.
—Jeff Sharlet, author of The Family: The Secret Fundamentalism at the Heart of American Power

The stories Kathryn Joyce tells in Quiverfull are both riveting and deeply disturbing. This important book shines a light on a corner of the Christian right that has taken misogyny to sadomasochistic extremes, and reveals the sexual anxieties so often underlying modern fundamentalism.
—Michelle Goldberg, author of Kingdom Coming: The Rise of Christian Nationalism

Kathryn Joyce’s well-researched book delivers much more than a quiverfull of understanding about this movement that twists religion to justify keeping women barefoot, pregnant, and powerless. It’s also a stark reminder why those who value reproductive justice must actively engage in politics and the public debate.
—Gloria Feldt, author of The War on Choice and former president, Planned Parenthood Federation of America

This is a deeply informed, highly nuanced, and exceptionally valuable text for anyone wishing to explore the religious and political currents that produced the Sarah Palin phenomenon. Perhaps the highest praise one could give Quiverfull is that its “Christian patriarchal” subjects would be hard-pressed not to see themselves as fairly portrayed by the self-described “secular feminist” who wrote it.
—Garret Keizer, author of Help: The Original Human Dilemma

Read an excert from Quiverfull at Killing the Buddha.